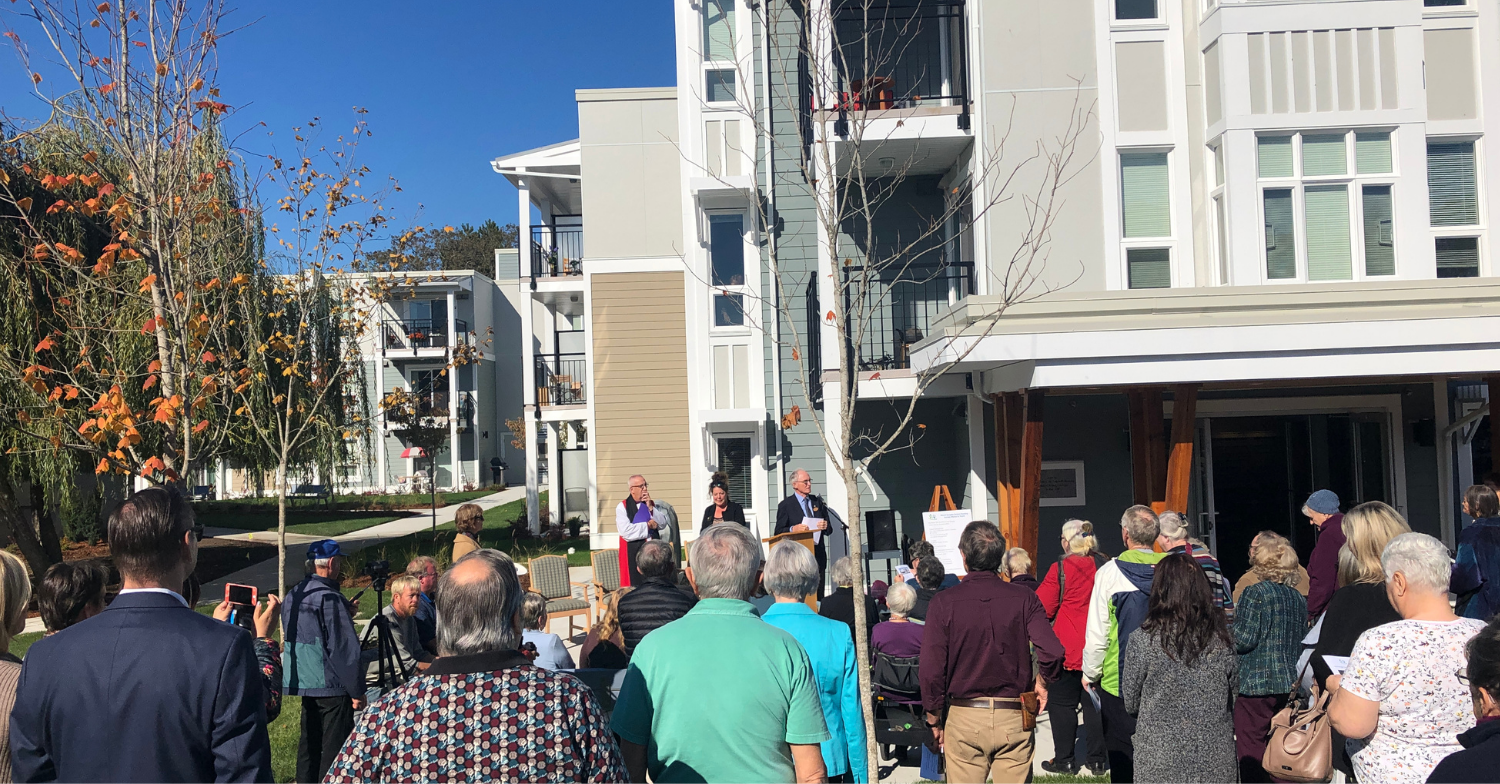 Earlier this Fall, Mount Douglas Manor won an award of excellence for affordable housing. The award is granted by the Annual Victoria Commmercial Buildings Awards program sponsored by the Victoria Real Estate Board.

Anglican Church Women (ACW) donated a large suburban Saanich property to the Mount Douglas Senior Housing Society in the early 1970s. Society directors came from the ACW and Anglican parishes. Faithful stewardship by the society over the years has provided safe housing for low income seniors. 80 units of affordable rental housing in the first rambling two storey structure from the 1970s has been carefully and lovingly maintained.

When all mortgage debt on the first building was repaid, the society committed to a new building for affordable rental housing for seniors on the vacant northern portion of the property. This major financial undertaking consumed over three years of advocacy with neighbours and the municipality of Saanich before approvals were finally granted.

The society financed construction of a new three storey affordable housing building which took over two years to construct. It was filled within a month of completion in 2019. It is easy to understand why. The new project offers comfortable amenity spaces and extensive landscaping with walkways and raised planting beds for residents growing vegetables and flowers.

Under the leadership of board chair, David Cooper and his building committee, the development was completed with a team of professionals including Number Ten Architecture, Citta Construction.

All consultants and trades on this project understood the need for affordable rental housing and committed to a program that brought the new building in on schedule and budget. Not an easy task in this market. The contractor invited over 175 subtrade bids to keep the project in line. The society was fortunate to find a capable professional administrator during development. Her attention to detail has made the project a success for happy residents in both the existing and the new buildings.

The diocese assisted with some bridge financing and professional advice from its former asset manger, Peter Daniel. Financing was secured through Vancity and the TD Bank. Mortgage insurance from CMHC has kept financing rates low so that rents stay affordable.

Bishop Logan attended the ground breaking ceremony with Isobel McKenzie, Seniors' Advocate for BC and both attended the ribbon cutting ceremony on completion in the Spring of 2019. Ms. McKenzie remarked at that ceremony that a job in her kitchen was still unfinished from the start to completion of this project. She was very complementary of the diocese and the society for the work it continues to do through at a critical time when seniors are finding is so difficult to afford housing.

The Victoria Real Estate Board award for this new project as the best affordable housing building of the year is a credit to the society, diocese and all involved who made it a reality.