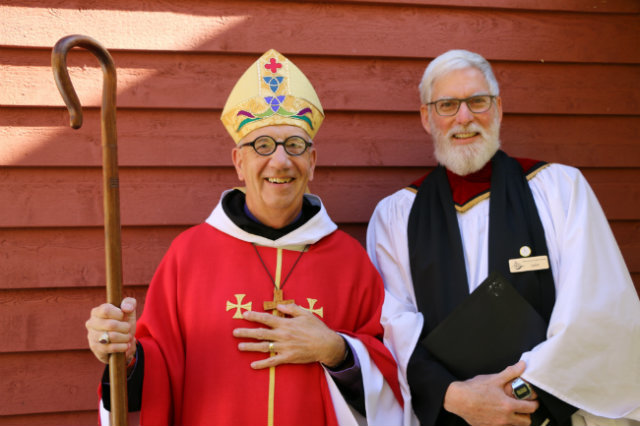 The logo for St. John the Baptist Anglican Church in Cobble Hill features a stylized mast and waves. That maritime theme is suitable for the incumbent, the Rev. Canon Dr. John Steele. Inducted October 13, Steele earned degrees in oceanography and physics from Royal Roads Military College and served in the Royal Canadian Navy before his ordination.

“It’s both an honour and a privilege,” said Steele about the incumbency, adding that he likes to communicate the grace of God through stories rather than offering prescriptive do’s and don’ts. He has served parishes in the Yukon, Port Hardy and at St Dunstan's, Gordon Head, where he spent 22 years. Previously, he was a partner in mission for the Anglican Church of Canada, helping establish a French-language seminary in Burundi. In addition to his parish and academic work, Steele served on national and international councils and spent 18 years as a primary reserve chaplain in the Canadian Armed Forces.

Hymns included With Joyful Heart, As a Fire is Meant for Burning, and Psalm 84 sung as How Lovely is thy Dwelling Place. The traditional ritual of the church wardens presenting the keys to the church to the new incumbent was particularly light-hearted since Steele has been there for a year already.