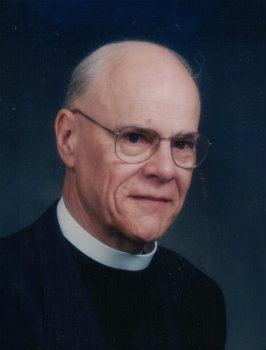 Easter is past – but not over. Not even for this year. Every Sunday is a commemoration of Easter, why the Sundays in Lent are not part of the 40 days of Lent – they are little Easters! It cannot be passed for us as individuals – every day we must live in the power of that faith a life that is Eternal. -       Editorial, (Ben Ragg) Diocesan Post, May 1984

The words above were written by the Rev. Canon Harold Ivor Groves (Ben) Ragg. Those of us lucky enough to know him, knew him as Ben. He wanted it that way. He was a simple man in so many ways, but very strong in his faith, in his love for the Lord, for his family, and for his friends. He had a lot of friends. I was honoured to be one of them.

I first met Ben in the fall of 1983. He was editor of the Diocesan Post, as well as rector of St. Luke’s, Victoria, and an active member on many diocesan committees. He was a busy man, but never too busy to spend quality time with anyone and everyone. I accepted the position as co-editor of the Diocesan Post, and for the next three years, Ben and I worked diligently together on getting the paper out on time.   In the 1980s, producing the paper, doing the paste-ups, was literally a cut-and-paste undertaking. Some of us, not many, had computers, but only as word processors. With a vague idea of layout, I would type the master copies before taking the stories to the Pennysaver, where the editors worked with me on the final layout. I would then edit the paste-up copy and the paper was ready to go to press and be mailed out to Anglicans across the diocese.

Getting the paper out was a lengthy process and not always an easy one, but Ben and I made a good team and were always pleased with the end result. Over the course of three years, Ben and I became friends (and his wife, Marion, too). Ben christened my first child at St. Luke’s. He loved children. That much was obvious. For the next year, I would bring my growing baby with me for our monthly meetings, and Ben joked that we now had an assistant co-editor.

We covered some interesting stories over the years we worked together. The Archbishop of Canterbury, Robert Runcie, visited Victoria in 1986; Ben and I were part of the press who interviewed him. We followed the ongoing campaign and resulting construction of the cathedral completion project. We challenged the Nestle Boycott, addressed issues of workers’ rights during the lengthy government workers’ strike and so much more. Ben was my mentor in so many ways. He never judged me or my opinions. He was a gentleman in every sense of the word. It was an honour to know and work with Ben.

So how does one define a person? In the legacy he or she leaves behind. Ben was a quiet, unassuming individual, driven by faith. He didn’t seek glory or accolades, always looking for the good in everyone and everything. As he saw in Easter—the restorative, ongoing faith of every Sunday—he is, to many of us who knew him, the banner which led us on, the one who encouraged and supported us, the one who cheered at our successes and mourned with us in our sorrows. In short, he was the man who cared.   Ben is being laid to rest next to his wife underneath the lamp post at St. Luke’s, Victoria. The light will guide his way; but, with his never-ending sense of humour, he claimed the light would also help him and his wife, Marion, continue with their reading—for eternity.   Ben. You will be missed. But your legacy lives on.

RAGG—The Rev. Canon Harold Ivor Groves Ragg (Ben) died in Shawnigan Lake, February 25, 2018. Born in Winnipeg, he grew up in Calgary where his father was Bishop from 1943-1952. With his father, both brothers, and one brother-in-law ordained Anglican priests, he knew his calling from an early age. Ben studied History at UBC, received his LTh from Trinity College, Toronto, was ordained Deacon in St. Barnabas Church, Victoria, in 1952, and priest a year later. After a curacy at St Simon's, Toronto, he ministered at Christ Church, The Pas, Manitoba, where he met his wife Marion; in Castlegar, BC; St. Luke's in Vancouver; a 3-point parish including Blackwell (Sarnia), Bright's Grove, and Camlachie, Ontario; Christ Church London; St. John's in Duncan BC; and St. Luke's Cedar Hill in Victoria. He retired in 1995, serving as Interim rector at St. Martin-in-the-Field in Saanich, and he returned to St Barnabas, Victoria, as an Honorary Assistant. His work in hospitals as visitor and chaplain was greatly appreciated by many. He was editor of the Diocesan Post for several years. He considered some of his most important work to be his time as chair of the Diocesan Social Concerns Committee, which involved supporting First Nations land claims, health concerns, and other issues. His time at Christ Church, The Pas, where searchers tracking the lost Franklin expedition built the pews and other items in the church, sparked his keen interest in the search for Franklin's remains. In later years, he and Marion pursued their love of history in several trips to the UK and Europe. Predeceased by his wife, he leaves three daughters, two sons-in-law, ten grandchildren, and four great-grandchildren. A funeral service was held at St. Luke's Anglican Church, Victoria, on March 7, 2018.