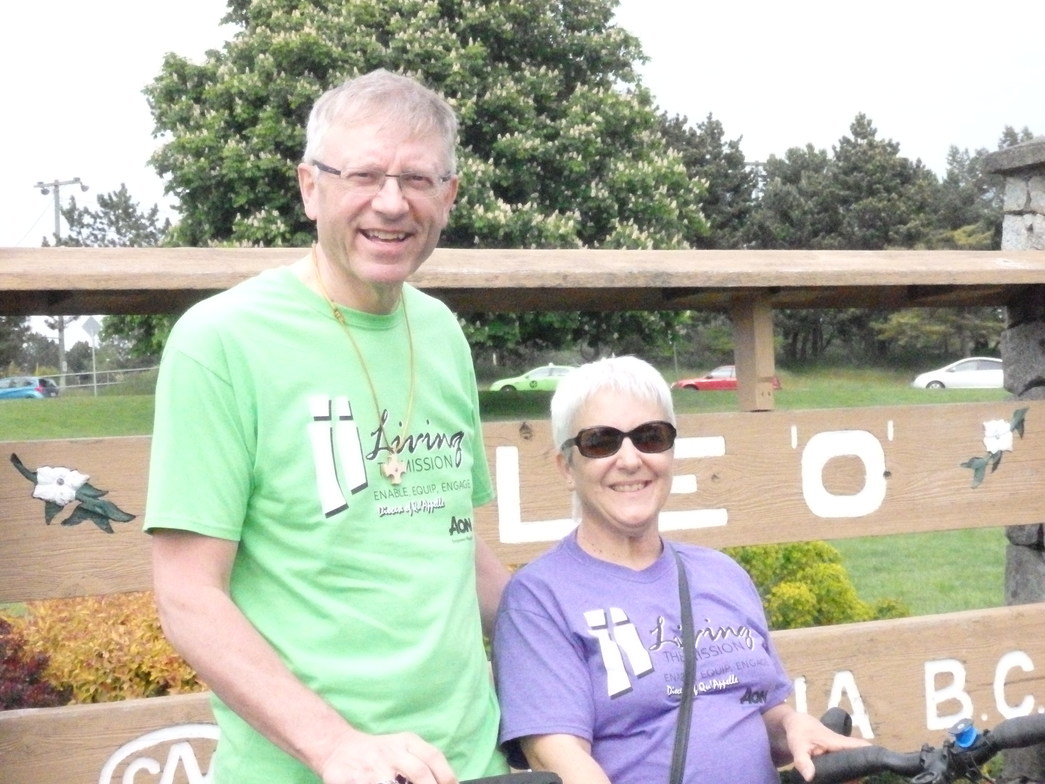 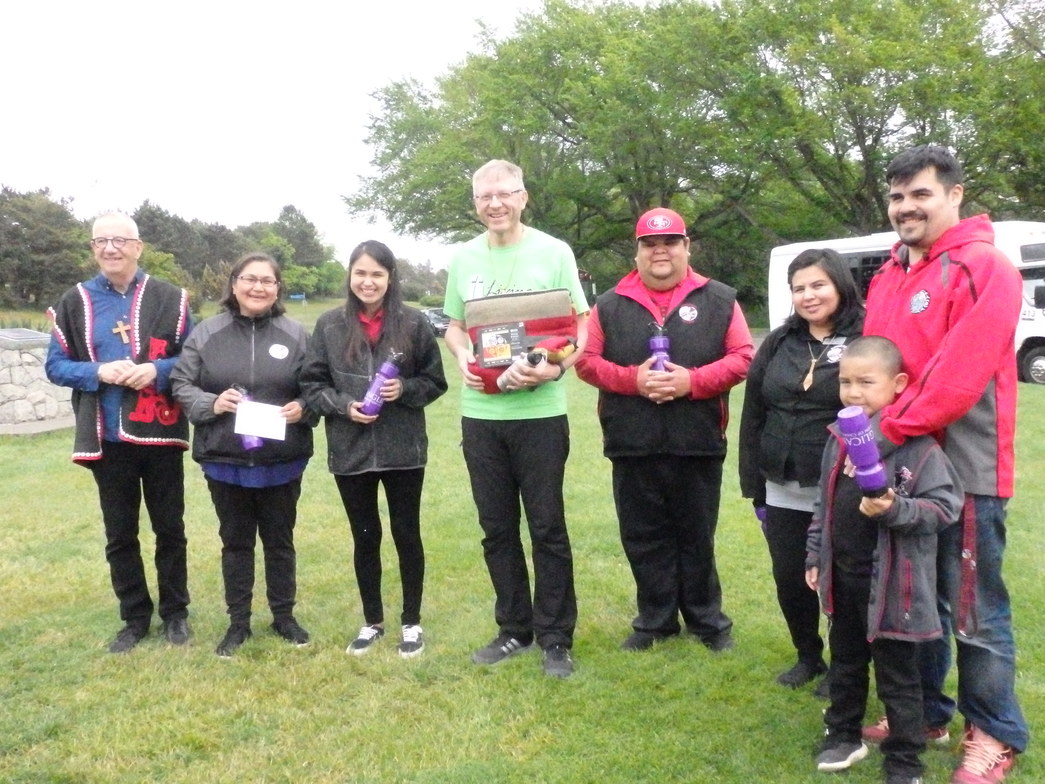 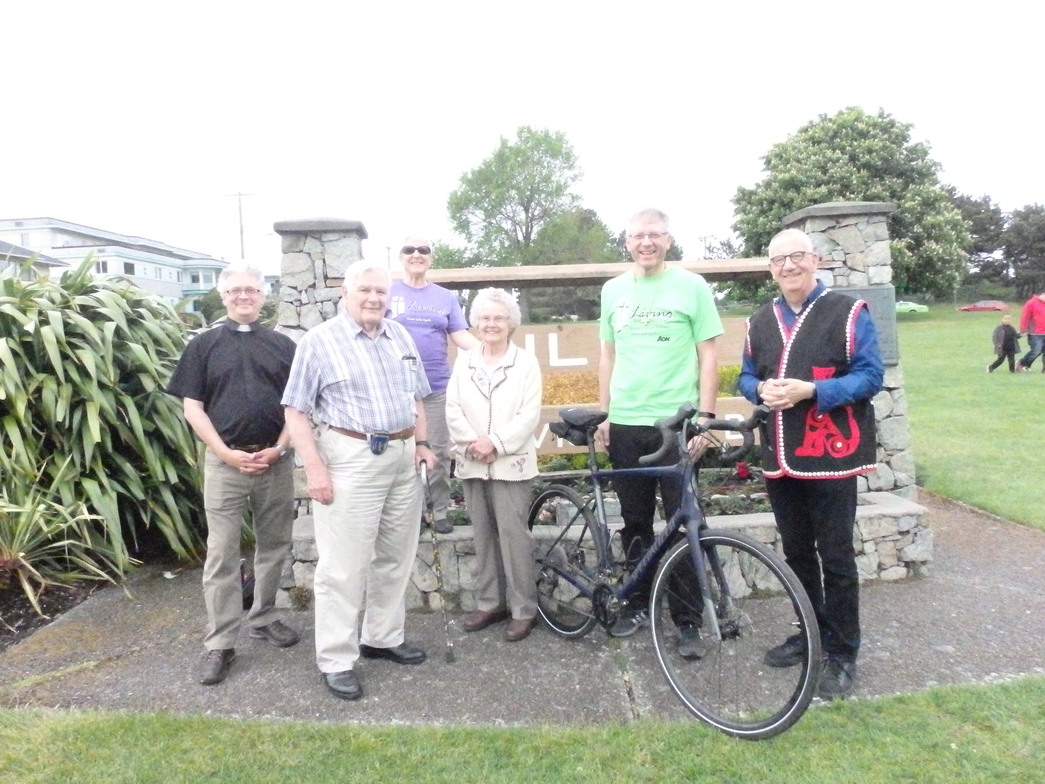 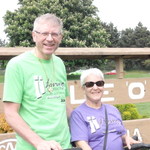 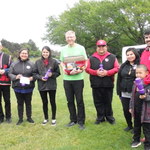 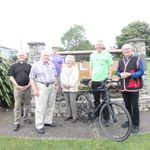 On May 18, Robert Hardwick, bishop for the Qu-Apelle diocese in Regina, set his bicycle against Victoria’s Mile Zero monument in preparation for a grueling cross-Canada ride.

Bishop Logan gave Hardwick a special blessing before his journey and encouraged him by passing on wisdom he’d been given by First Nation’s elders during his Sacred Journey. Diane Sam and other members of the Songhees Nation welcomed Hardwick to the land and presented him with a woven blanket. Doug Bowen and Rev. Craig Hiebert were also there to wish him well as were two surprise visitors from St. Luke’s, Regina—Tom and Sheila Fulton.

Hardwick’s wife, Lorraine was also there. She is driving the car with a trailer attached. She said she’s been practicing and “so far, so good.” They plan to communicate by cell phone. He will have a head start and once she overtakes him she will find a pull-out and give him a rest, supplies and whatever is required. She says, “driving solo is going to be a challenge.”

Hardwick is focusing on unity, healing and reconciliation during his cycling pilgrimage. He hopes to raise $2 million from dioceses and from people he meets during his trip. The money would be used for a variety of charities—a medical centre in Burundi, Habit for Humanity in Regina, First Nations and children’s ministries as well as a diocesan theological school. But his main priority is meeting people and praying for them.

Hardwick, 62, only started cycling five years ago. The enormity of his undertaking is even more remarkable when you know that Hardwick underwent heart surgery in 2013 and has lost 100 pounds since that time. He said he had two options—he could grow to 8'.6" or reduce weight!

Many of us wondered how we would deal with the Rockies. He said he noticed how steep they were on his drive out to Victoria. When asked how he will deal with the harder sections of the trip, Hardwick said, “I plan just to think of the next turn of the crank.  What I try to do on the really difficult stretches is to think of those who have asked for prayer who are going through difficult times in their lives—so to associate, in some small way, my pain as I go up the hill with the pain that other people are suffering—whether that is issues of residential schools for First Nations or those going through major health issues. So, I’ve got a list of people and situations to pray for which I am reserving for those difficult stretches.”

When asked about the enormity of his cycling pilgrimage, Hardwick said, “I think all things are possible. This whole pilgrimage is one which is spiritual, physical, mental—those kinds of challenges all come into the picture. My hope is that daily prayer through this entire journey across Canada will help.”

Bishop Hardwick is cycling with prayer requests taped to his handle bars. You can follow his journey on Facebook.