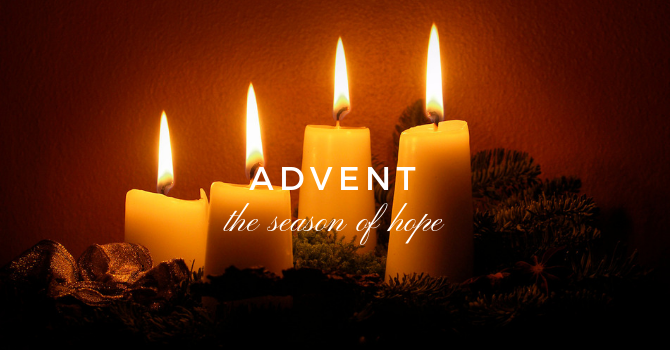 Save to your Calendar

Contrary to popular belief, Advent (which begins this year on November 29 and ends on December 24), is not just a four-week lead-up to Christmas.

As Rev. Jamie Howison notes in his 2014 sermon titled "The Irrational Season":

Yes, part of the force of Advent is to ready us to mark Christmas, but more significant is Advent’s insistence that Christmas is but one part of a continuing story; a story that extends beyond the New Testament, through our own times and in to the horizon of all of time and history to which God is drawing us. Even “creation waits with eager longing for the revealing of the children of God,” Paul writes in his epistle to the Romans. “[T]he whole creation has been groaning” for that completeness. (Rom 8: 21, 22) God has not yet finished with us and with our world, and so particularly in Advent we are called to be a people of expectant hope and watchful longing.

In Anglican churches, Advent is marked with particular liturgies (worship services) filled with special hymns and readings and the progressive lighting of the Advent wreath of four blue candles representing hope, light, joy and peace and often a fifth representing the Christ child which is lit of Christmas Eve or Christmas Day.

We hope you will join one of our forty-four worshipping communities on these islands and inlets as we prepare our hearts and minds for the light which will dispel all darkness.

The word “Advent” is derived from the Latin word adventus, meaning “coming,” which is a translation of the Greek word parousia. Scholars believe that during the 4th and 5th centuries in Spain and Gaul, Advent was a season of preparation for the baptism of new Christians at the January feast of Epiphany, the celebration of God’s incarnation represented by the visit of the Magi to the baby Jesus (Matthew 2:1), his baptism in the Jordan River by John the Baptist (John 1:29), and his first miracle at Cana (John 2:1). During this season of preparation, Christians would spend 40 days in penance, prayer, and fasting to prepare for this celebration; originally, there was little connection between Advent and Christmas.

By the 6th century, however, Roman Christians had tied Advent to the coming of Christ. But the “coming” they had in mind was not Christ’s first coming in the manger in Bethlehem, but his second coming in the clouds as the judge of the world. It was not until the Middle Ages that the Advent season was explicitly linked to Christ’s first coming at Christmas.  - source: Christianity.com